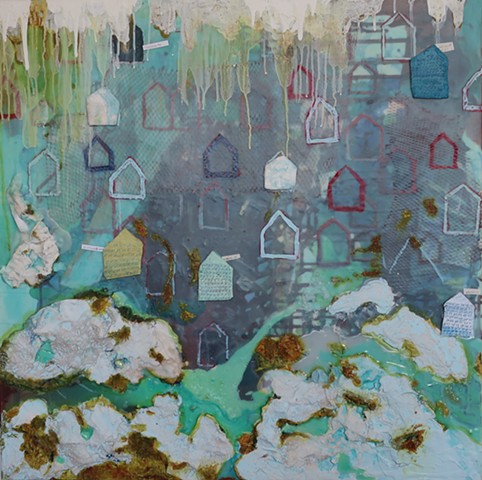 A mixed media painting: Among the first villages in the U.S. to be displaced by sea level rise, Kivalina, Alaska sits on an island predicted to be under water by 2025 (Wiki). Others include: Newtok, Shishmaref, Shaktoolik, and Port Heiden.

"Kivalina" won a second place juror's prize at Mother Brook Art Center. Here are the juror's observations: "Despite bright colors and droll houses of "Kivalina," one can't help but feel that this painting is more than it seems. In fact, it seems rather ominous. The outlines of houses are simple and imprecise, as if made by a child, imparting a sense of familiarity and home. However, the drips of paint and wax and encased slips of paper, houses buried under layers of translucent material, the almost toxic yellow shade of the crusty globs creeping in from the edge of the canvas, and--most of all--the tally marks on some of the houses impart a sense of being trapped or being in danger. A quick google query confirms this sensation of dread: Kivalina is a small Alaskan village facing imminent destruction due to rising sea levels. With simple, universally recognizable imagery and diverse textures, [Kivalina] makes a striking statement about the threat to home--and the planet--posed by climate change." --Vicky Rodriguez